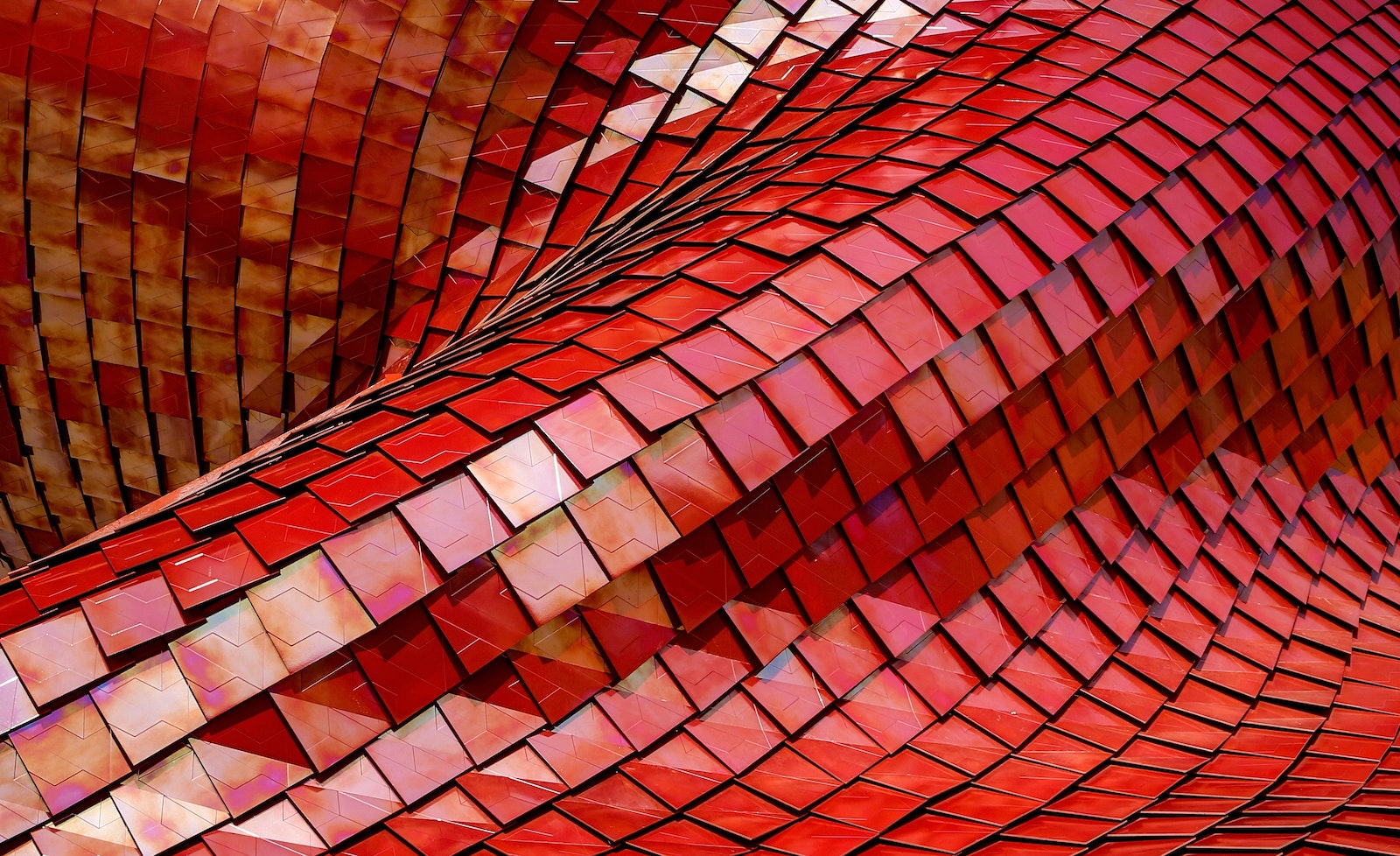 Tether is a risk to the crypto ecosystem. A growing number of voices subscribe to this. Especially allegations of manipulating BTC prices by artificially increasing Tether’s market cap when “Bitcoin is falling” is a concern. But to date, the full picture of Tether’s inner workings remains unclear.

Starting from the assumption that Tether’s market cap matters to Bitcoin, we set out to analyze whether we can leverage sentiment to predict Tether’s market cap. The findings show that there is an increase in sentiment activity 12 to 8 days before market cap shifts. Moreover, the findings establish data for the possibility of sentiment manipulation by either Tether or other insiders aiming at profiting from “undervalued” USDT.

First of all, we evaluated which of the social media communities talks about Tether the most. After comparing crypto sentiment data from Twitter, Reddit and Bitcointalk it shows that, in relative terms, it is the Reddit community, which is why we used its sentiment data for further analysis. We used data from the last 22 months (2017-09-01 – 2019-07-30). All sentiment data quanitfying 93 emotions and topics of discussion are retrieved from the Augmento API.

To answer the first research question, we analyzed which news broke at what time in Tether’s history and whether they caused sentiment spikes. We then identified dominating sentiments. To provide more context, we built plots of Tether sentiment, Tether market cap, Tether price, and Bitcoin price.

In a further step, the same analysis was applied to Tether sentiment and prices (daily low).

Tether’s sentiment does not seem normal 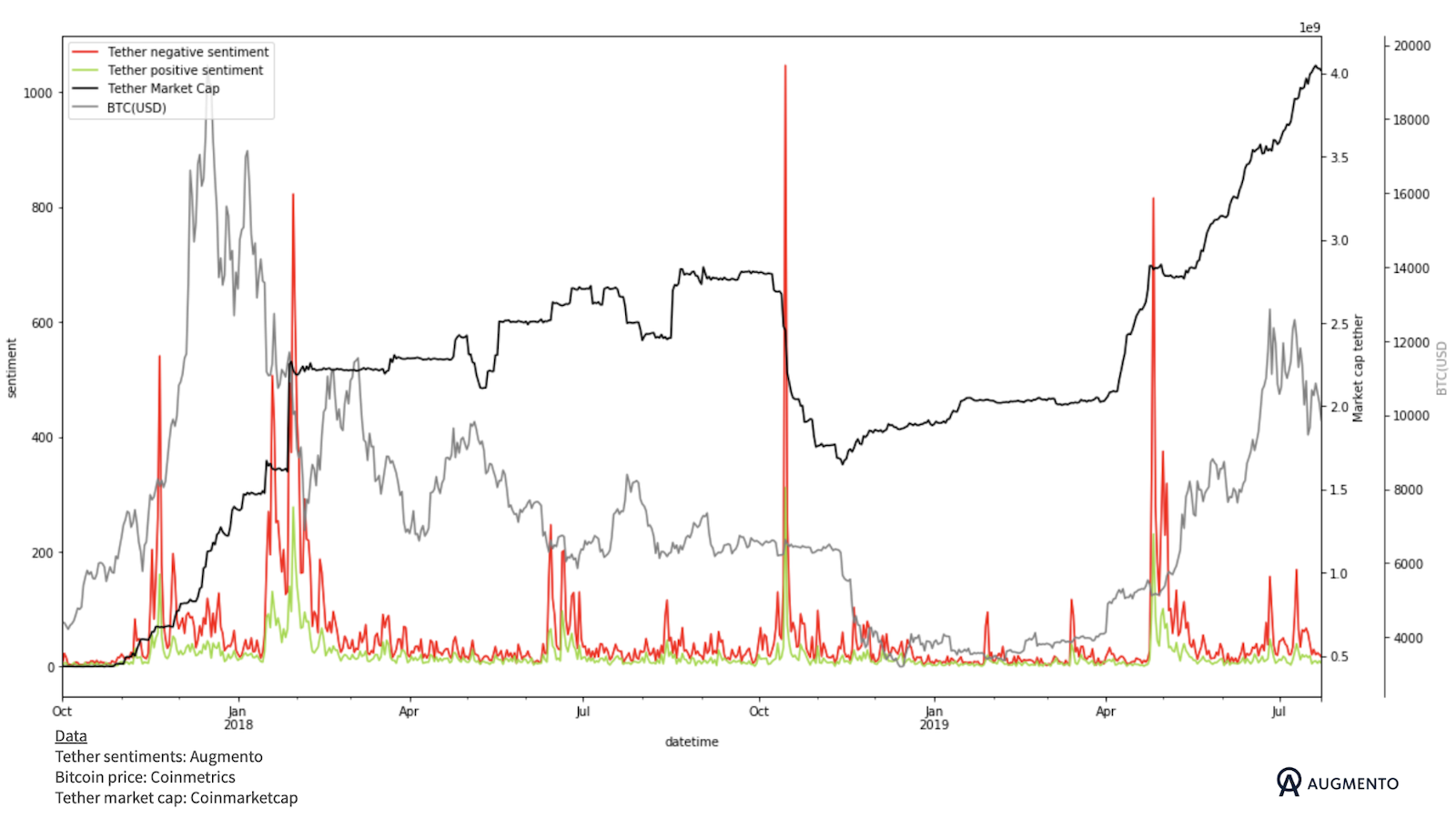 The extreme spikes in sentiment show how intensively the community talks about Tether when there is news. However, after a story breaks, interest drops fast. It seems as if the community is over and over again surprised by bad news about Tether.

Comparing this to Bitcoin negative sentiment we see that BTC Sentiment is much less spiky: 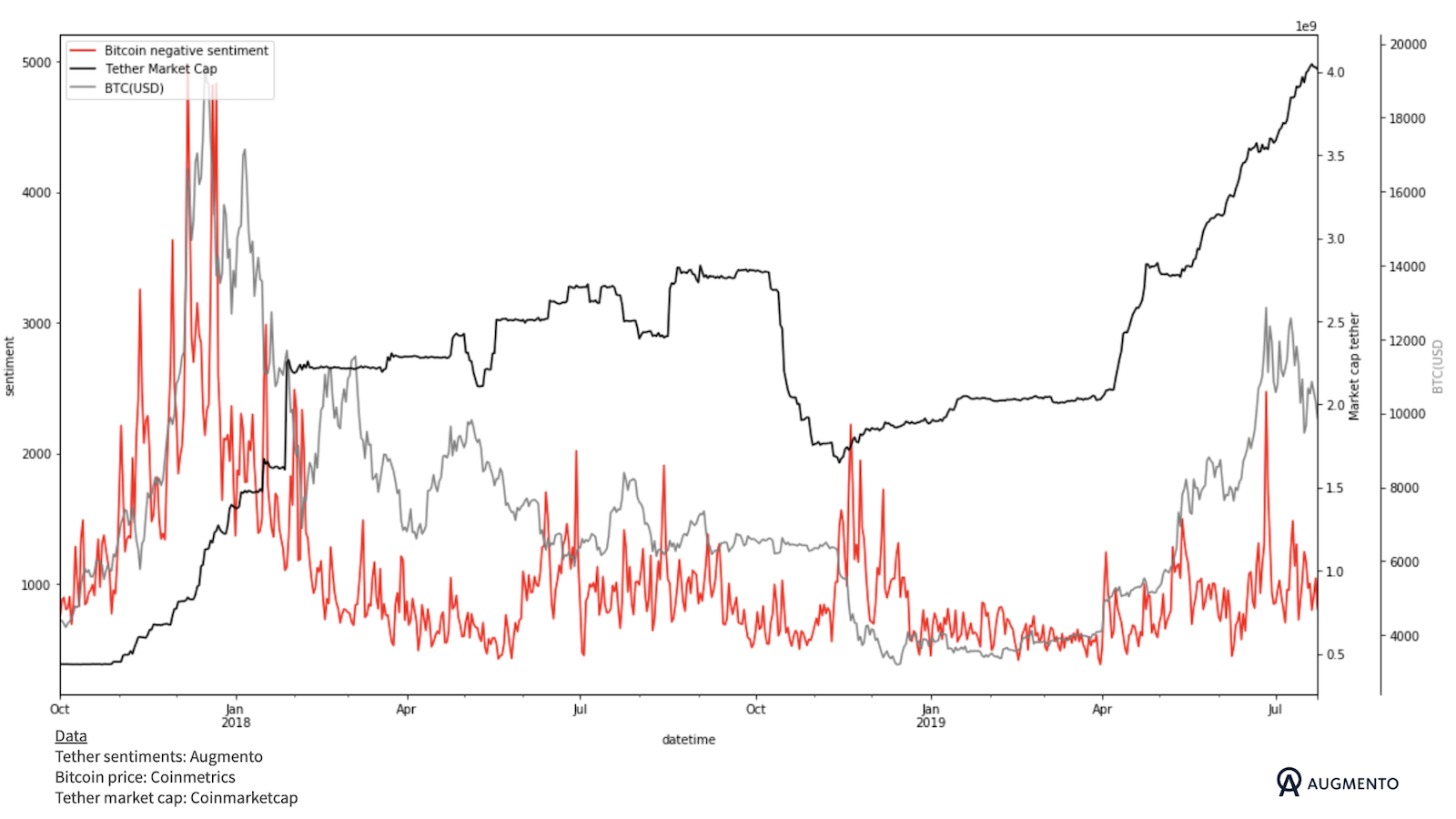 Also compared to other coins, such as IOTA and Stellar, Tether shows much more extreme sentiment spikes1.

These are headlines from articles that relate to the Tether negative sentiment spikes:

2018-06-13: Bitcoin is slipping after a study found signs its 2017 bull run was driven by market manipulation

A timeline of negative sentiment peaks labeled with article headlines discussed by the community at these times: 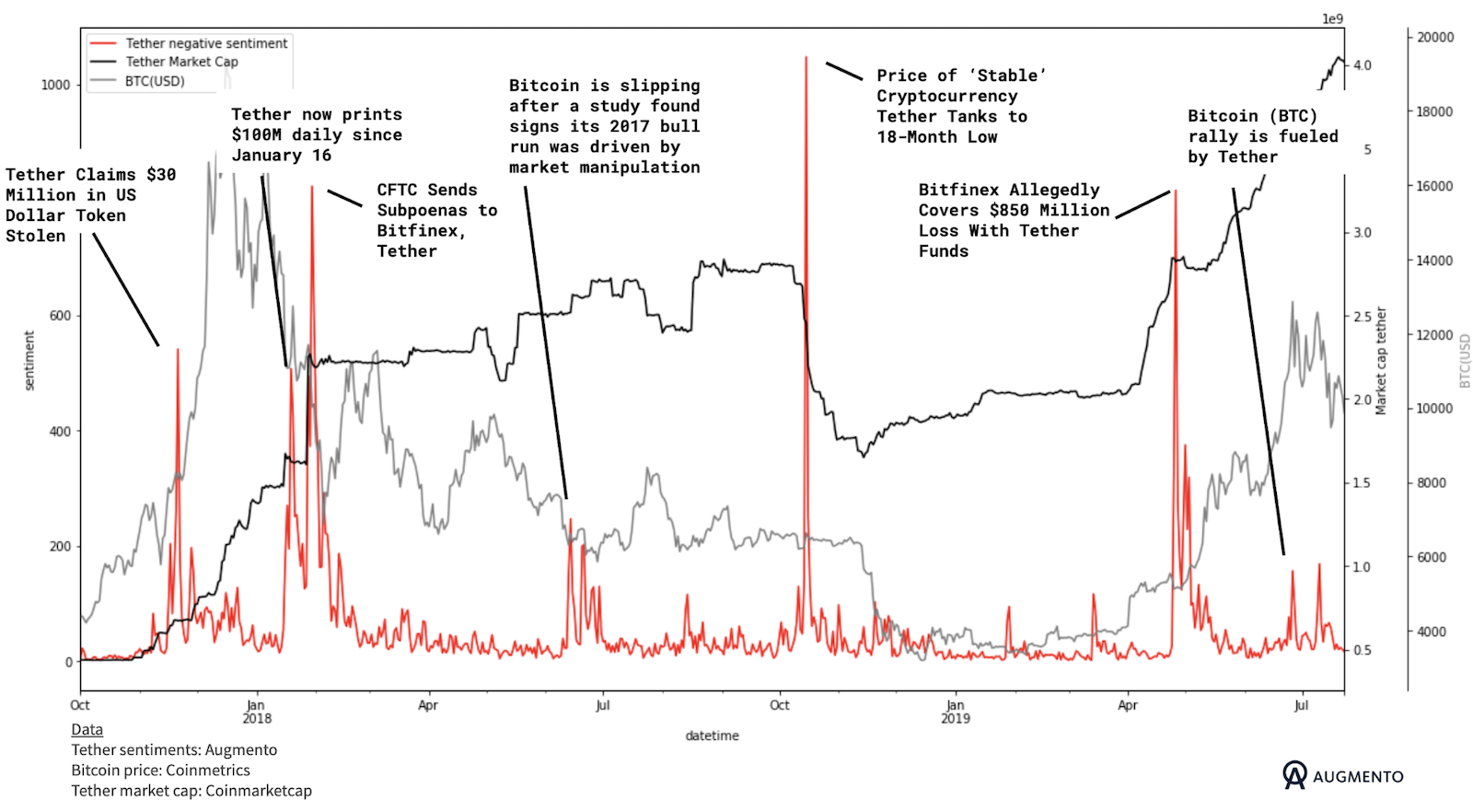 Whether or not these sentiment spikes are natural occurrences or intended results by market participants is not possible to determine at the moment. Why this would be a key insight, however, we learn in the second part of this analysis.

The result from the described methodology (2) is a correlation matrix. It shows to which degree Tether sentiments/topics from Reddit correlate with Tether market cap. The time lags range from -24 to + 24 days. For example, a “relatively bright” value at x  = -12 means that this sentiment/topic correlates “relatively strong” with the Tether market cap movement 12 days before the market cap movement actually takes place. 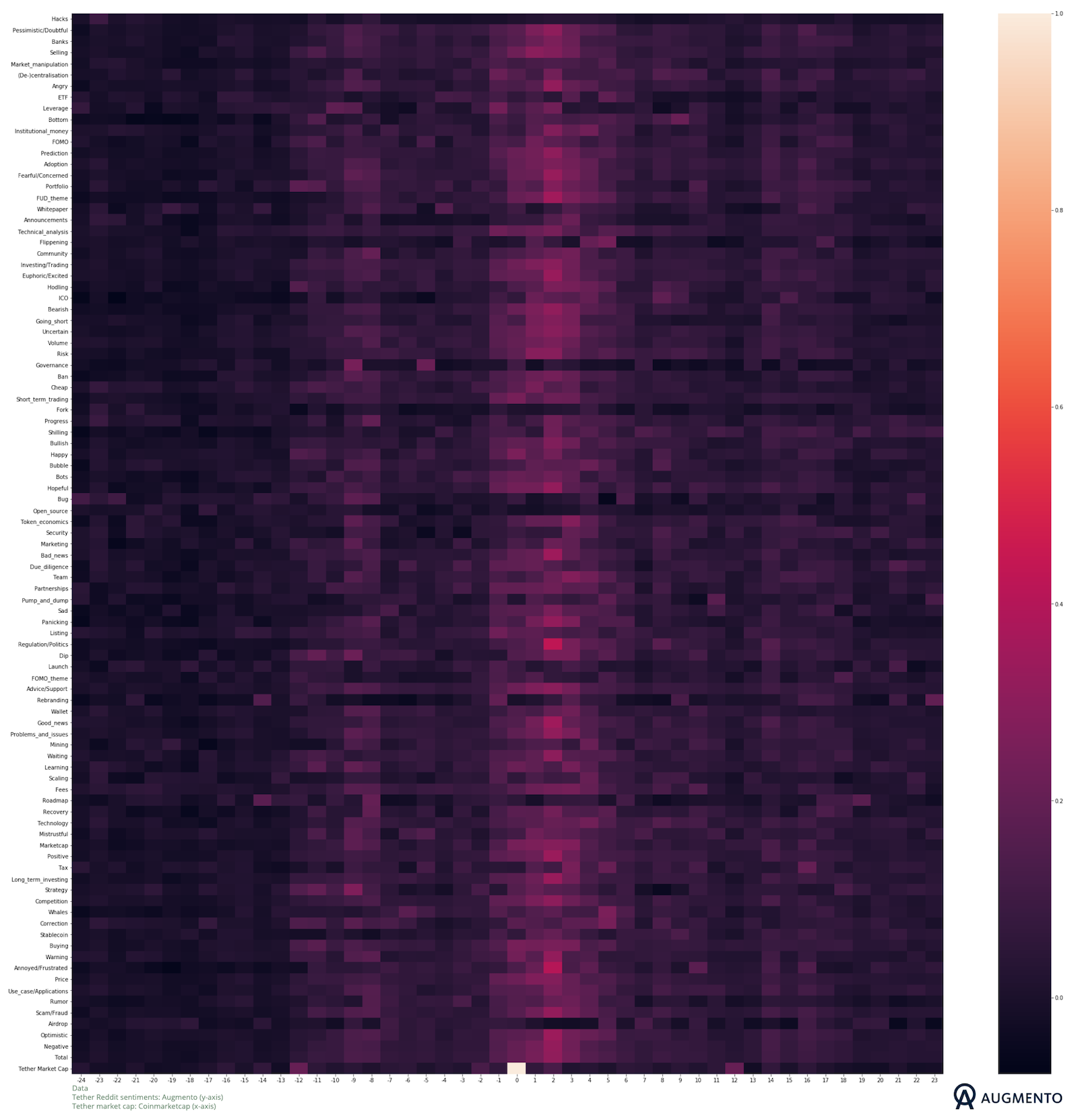 First of all, we find a very bright vertical lagging correlation zone at x-value +2. That means that two days after the Tether market cap moves, people debate most intensively about Tether. Here, two fields catch our eye: Regulation/Politics and FUD_theme. The former measures how often people mention regulatory and political topics in relation to Tether while the latter measures how much talk includes FUD. Relatively strong correlations between Tether’s market cap and these sentiments make sense in the context that attorneys are on Tether’s tail, that Tether has issues with regulators and that the community might react with FUD to shifts in Tether market cap. Plotting Regulation/Politics and FUD_theme with Tether market cap over a time axis: 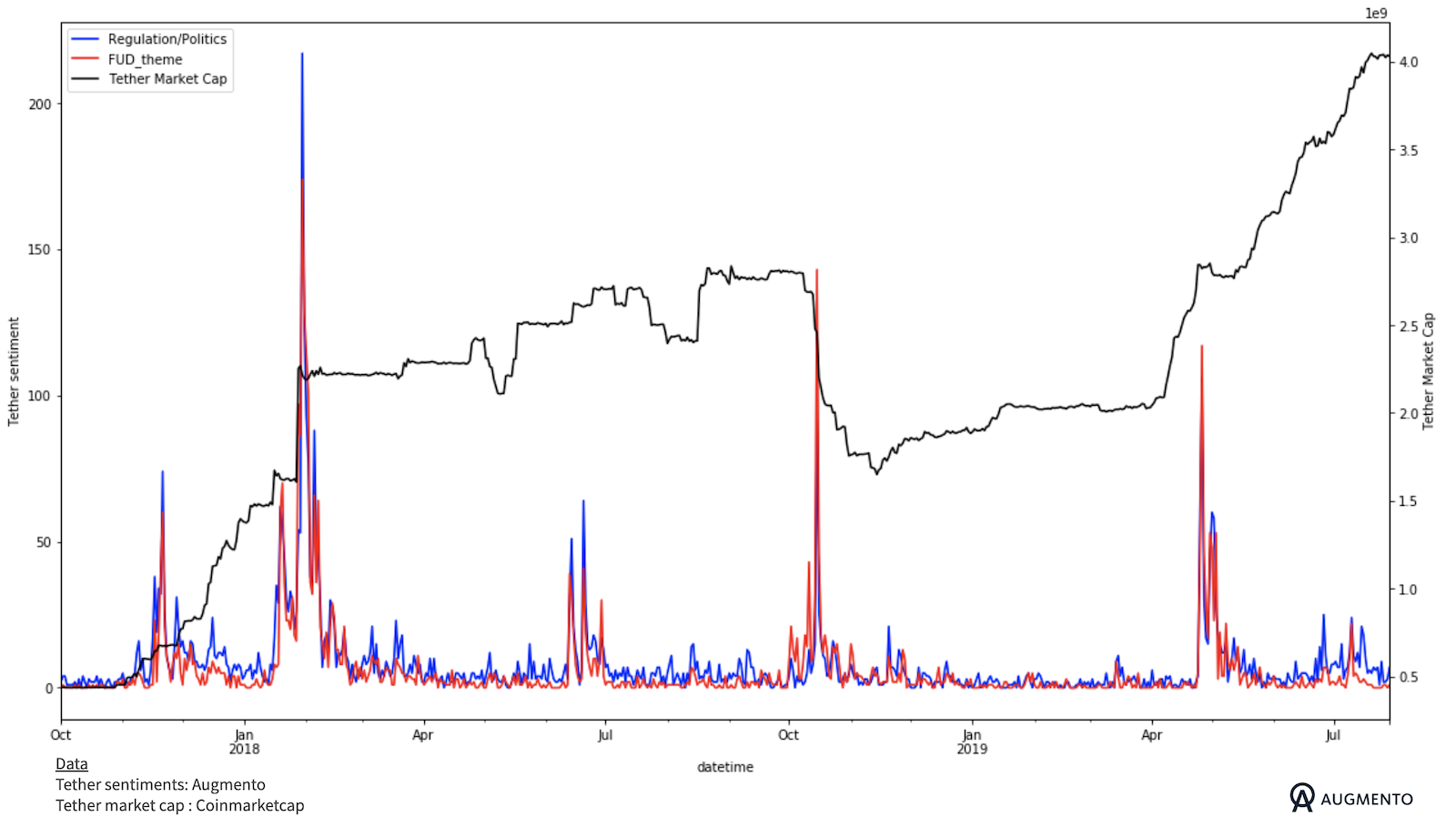 Coming back to the correlation matrix, what draws our attention most is that there is an entire bright vertical correlation field forming around 12 days before the market cap breaks out.

A hypothesis emerging from this: If the market cap moves today and is accompanied by a rise in sentiment/topics of discussions related to Tether, the chance increases that Tether market cap moves again between 12 to 8 days from now.

We guess that the 12-day “foreshadowing effect” might be linked to the inner workings of Tether. For example, there might be a connection to the mechanism that Tether prints USDT before actually releasing them.

If allegations that Tether manipulates Bitcoin via its market cap are true, then being able to predict Tether market cap via sentiment could prove to be useful.

However, the data inspires more ways to think about the sentiment effect, namely as a controlled tactic within a lucrative strategy.

How could one profit from deliberately increasing sentiment activity before shifts in market cap take place?

Let’s look at how total sentiment (= a sum of all sentiment activity), Tether market cap and Tether price3(daily low) play out together: 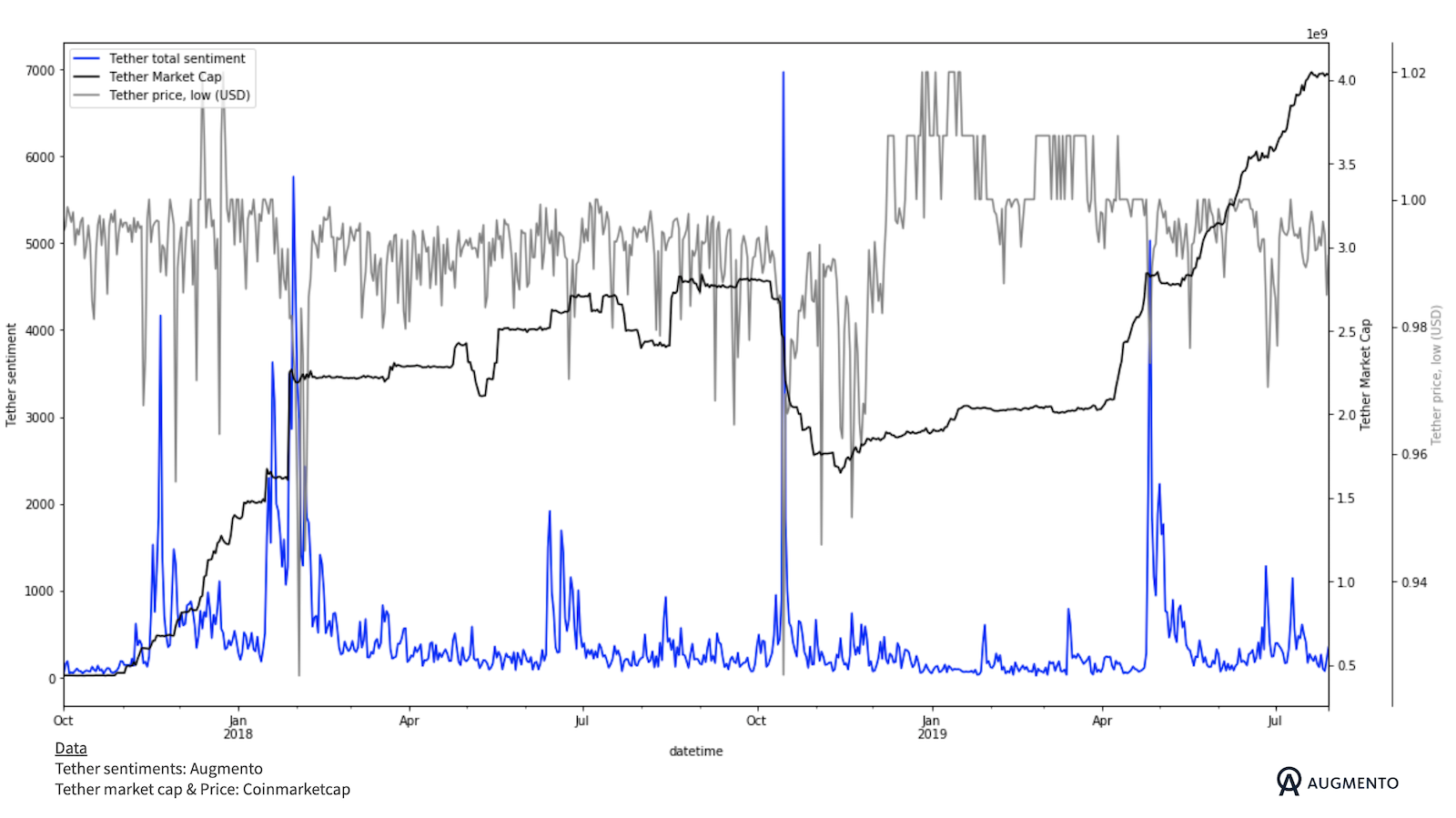 Sentiment spikes often occur either before or at the time when Tether price drops. We know that when Tether market cap rises FUD spreads on social media, possibly leading to a decrease in the price (USDT/USD).

There is reason to believe that Tether has used fake accounts before to influence the online discourse. Let’s assume Tether has accounts on Reddit with which they can increase sentiment activity.

This opens doors to many different types of manipulation. 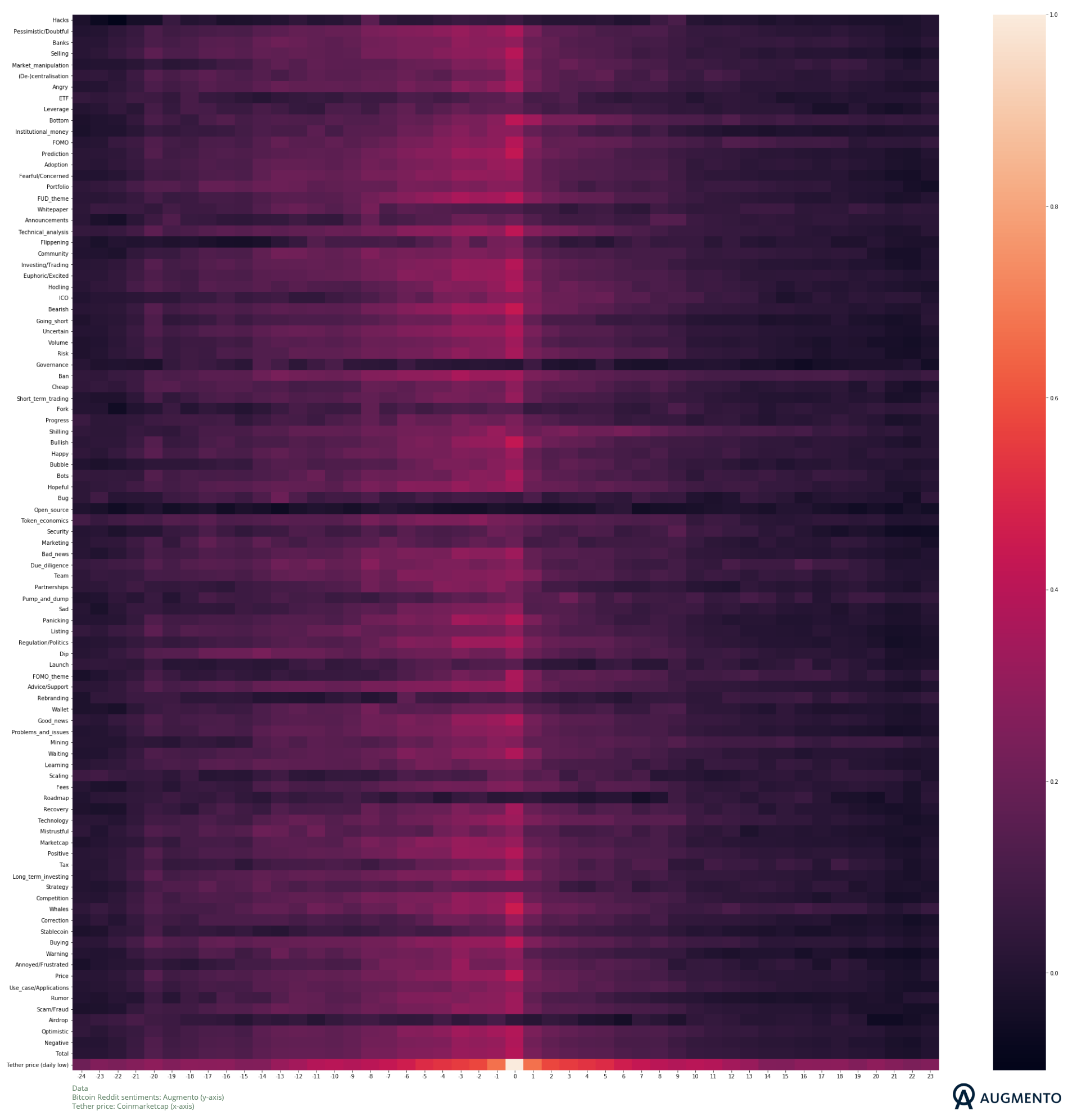 However, in order to prove such conspiracy that Tether or other users knowingly manipulate the discourse with that intention, we would, amongst others, have to check if the sentiment spikes are driven by the same accounts.

A caveat of this research is that we currently cannot explain the 12-day “foreshadowing effect”.

For further research it would be crucial to identify whether Tether sentiment spikes evolve naturally or as an intended result by market participants. Also, the research could scrutinize the reason behind the described effects and analyze whether a combination of market cap and sentiment signal could enable building a reliable Tether market cap and price predictor. Moreover, further research could analyze in more detail arbitrage possibilities emerging from the triad of increased sentiment activity, change in Tether market cap and change in Tether price.

Finally, we invite other researchers to use Augmento sentiment data to enrich their own analysis.

We would like to thank Sam Aiken for helping with this research.

1Also compared to other coins, such as IOTA and Stellar, Tether shows much more extreme sentiment spikes. However, to better judge if such sentiment spikes are normal or not we have to take into account that Tether is connected to Bitfinex, which is why reviewing sentiment data from posts mentioning exchanges would provide a fuller picture.

2As a sense check, we applied the same analysis to sentiment data from Twitter and Bitcointalk.

Here, we find similar lagging sentiment fields after market cap shifts, but Reddit is the only community exhibiting the foreshadowing effect. To double-check whether the +- 12 days market cap correlation could be an artifact of the employed algorithms we switched Tether sentiments for Bitcoin sentiments because there is no intuitive reason why Bitcoin sentiment should exhibit the same correlations as Tether sentiments do. Indeed, this test draws a much more random picture.

3Data collected from Coinmarketcap has rounding errors when price is bigger than $1 USD.


Want access to live sentiment data for Bitcoin and cryptocurrencies? Get in touch. 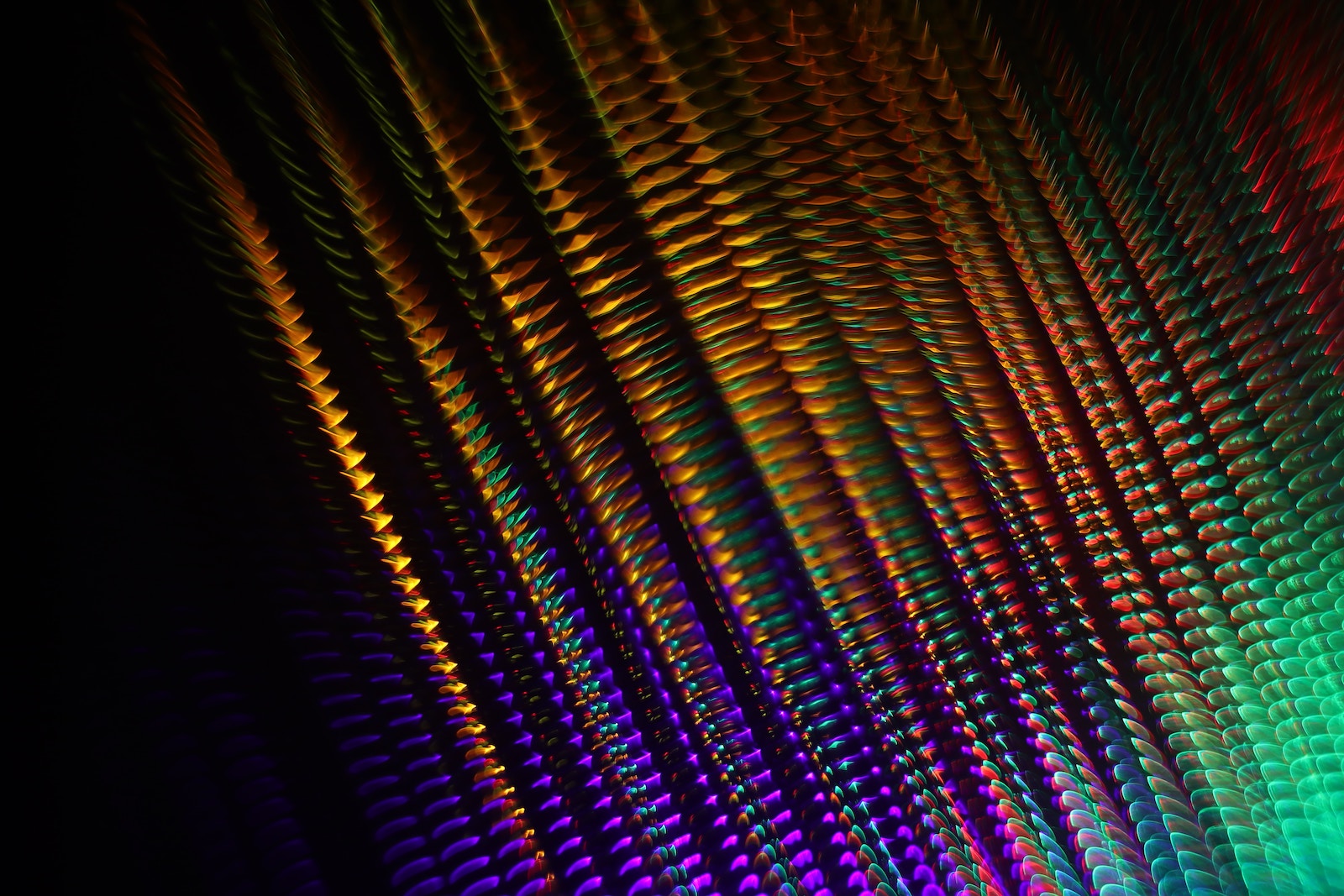